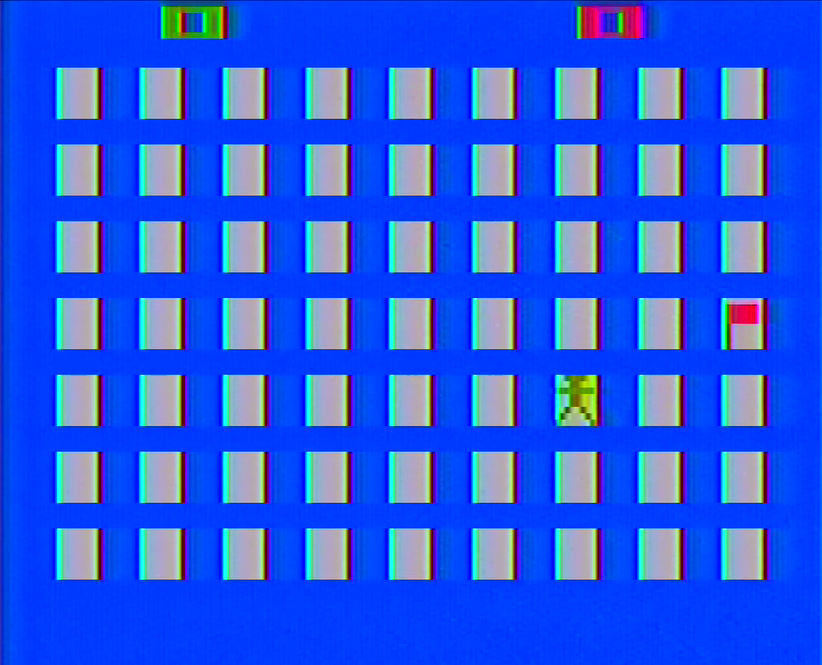 In Flag Capture, each player controls a single explorer character on a playfield of seemingly blank spaces. Spaces can contain one of four things: a bomb, which will send you back to your starting place; an arrow, which will give you a clue as to where the flag is, a number, which indicates that the flag is that many spaces away from the explorer, or the flag itself, which will earn the finder a point. In most of the two player gametypes each player has a turn to move anywhere they want on the board – even wrapping around the borders – and uncover a space, though obviously if you don’t find the flag, your opponent may end up with some useful clues to find it on their turn. As a result, Flag Capture is something of a puzzle game, where players are trying to essentially put together the clues before their opponent does.

In these two player gametypes, the first player to get 15 points wins. There are several wrinkles Flag Capture introduces in its gametypes to keep things interesting; the default game is a free-for-all where players don’t have turns, but can simply move and check spaces freely. This free-for-all game is sort of an action-oriented variant, where you still have to pay attention to clues but also move quickly. Bombs can absolutely ruin your chance of getting the flag if you’ve deduced the general location and it ends up being much more convenient for your opponent.

Beyond that, games get a bit slower paced and more mischievous. The stationary flag gametype is pretty straightforward – put together the clues (or get lucky) and find the flag before your opponent. But Huether also introduced two “moving flag” variants. In these, the flag will move each time a player checks a spot. If they don’t find the flag, it will shift location one space in whatever random direction it starts the game moving in. To further complicate matters, there are two moving flag variants: in one the flag will simply wrap around the screen as the players can, and continue moving in whatever direction it started in, but in the other it will bounce off of the edges and ricochet back at the same angle it hit this invisible, selective wall. These moving flag games can prove maddening until you can sort out how it’s moving, but they’re fun wrinkles to the game concept.

Finally, there’s an alternative “solo” two-player mode where each player searches the playfield individually, scoring a point each time they search a spot until the flag is found and play switches to the other player; the goal is to end up with fewer points than your opponent. Huether also included a timed one-player game, where you must find the flag as many times as possible in 75 seconds. Each of these also include the moving flag variants. As for the difficulty switches, these are only used in the free for all mode – where they slow down the player’s movement – and in the solo two player mode, where they change the number of points you score with each search from 1 to 2. An Atari chip layout designer and engineer, Steve Stone, is credited by Huether as having come up with several of the gametype ideas.

Needless to say, there’s a fair amount going on in Flag Capture. Huether has said that the game is one people either really got and enjoyed, or absolutely hated. There’s nothing quite like it on the VCS or its competitors’ consoles, and the reasoning that goes into uncovering the flag first makes it one of the more cerebral games on the platform for its time. It also seems to have been largely overlooked by the nascent games press, but Dick Cowan wrote that it was a “must own” fun cartridge for the platform in a Xenia Gazette column published December 1978.

It does appear that Cowan was in the minority, however, as Flag Capture doesn’t seem to have been a huge sales driver for Atari. The game never was released in PAL territories, and ended up being discontinued by January 1982’s Consumer Electronics Show. Perhaps a greater indicator of how lackluster the game sold was Atari using it

as part of a late 1979 promotion – it, along with similarly less popular games like Space War, Basic Math, Surround and Blackjack, was eligible for a $2.50 off coupon to anyone who had registered their VCS with Atari. Atari Corp moved around 6,300 additional copies of the game for a rerelease in 1987 and 1988 – well below the numbers it was doing with games like Air Sea Battle, Defender, or its new releases. So suffice it to say, the number of people who “really got” Flag Capture probably wasn’t all that impressive. Huether himself said that while the game plays well, the graphics are pretty rough, and might have been one reason the game had trouble finding an audience.

Which is too bad. Flag Capture’s unusual and arguably forward-thinking design makes it an oddity at a time – and on a console – that saw more twitchy arcade-style games than anything else. Of all the games from the VCS’s first two years, this is one of a handful that holds up remarkably well. It may have been too unpopular to really shift VCS game design, but especially with a second player, a modern audience can find a lot to like here.