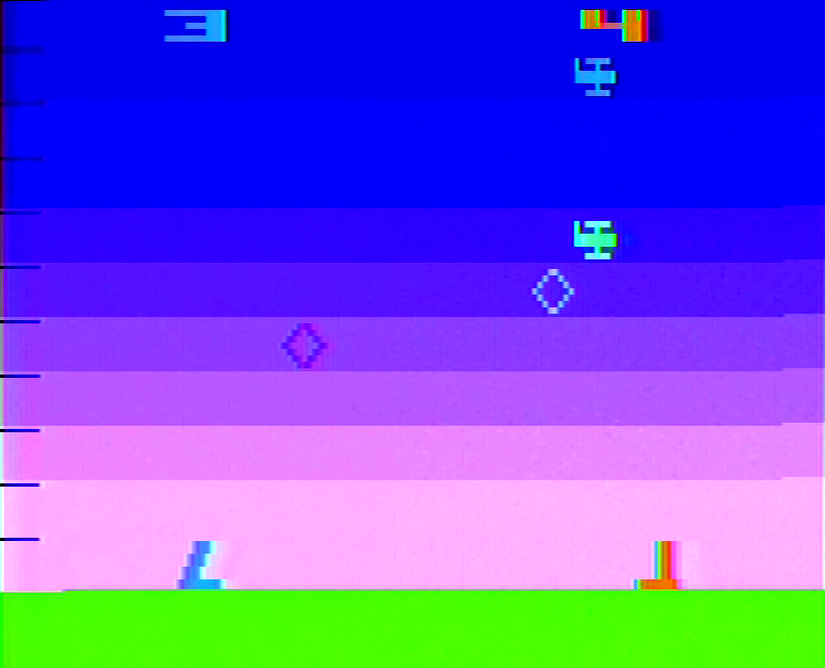 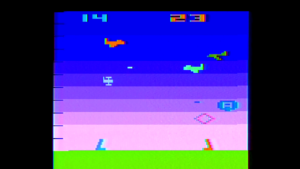 Game development on the new system had its own hurdles. Kaplan explained that initially they programmed on a teletype workstation connected to a time-share computer in Oakland, sending their 6502 assembly instructions to the computer to have it converted to binary code that the VCS prototype could understand. The setup could only show one line of code at a time, and the programmers needed to use an oscilloscope and analyzer to make sure the display was properly synced for a television. In 1977 this arrangement was replaced with PDP-D development computers featuring monitors and floppy disk drives, dramatically speeding up game creation.

Since the nine initial VCS games were all being developed roughly in tandem, ideas and development techniques were passed around the programmers. Seeing all the wild gametypes developed for Combat, Kaplan included a variety in Air-Sea Battle. Aside from the default anti-aircraft gametype, Air-Sea Battle included a target range game, where players shoot at rabbits, ducks, and faces; a submarine game where you fire torpedoes at ships, bombing and ship-based games where you fire up or down at planes or boats, respectively, and “plane vs. ship” modes where two players take aim at each other.

Different gametypes changed how you could fire your guns. Anti-Aircraft games had a stationary gun that could have its firing angle adjusted, while submarine games allowed you to move left and right but fired straight up. The target range games gave you both options, allowing you to adjust your aim and move left and right. Others put you in a constantly moving ship or plane where players could adjust their speed, with shots keeping the same forward momentum as the craft that fired them. Some “guided missile” gametypes also allowed players to control their shots with the joystick after firing, allowing for particularly spectacular shots as your projectile weaves past obstacles; the difficulty switches were used to determine just how big shots would be. While most of these variations were silly, Kaplan said, they were all pretty easy to do in the system’s hardware. He also adjusted some graphics in Air-Sea Battle’s target range mode to turn dogs into rabbits at Sears’ request.

The submarine games owe a fair amount to Midway’s March 1976 arcade game Sea Wolf, the seminal arcade game about firing torpedoes at passing ships while trying not to hit the underwater mines in the way. While the arcade game used a physical periscope to line up your shots, here you make do with an on-screen gun. This gametype wasn’t the only attempt by game companies to clone that arcade hit though – Fairchild did so with their January 1978 release Robot War/Torpedo Alley, which matched up closely with Atari’s rendition. Bally (the parent company of Midway) also appears to have launched its Professional Arcade platform with an official Sea Wolf cart, with “Missile” as a backup game; this was essentially an anti-aircraft game that still played like Sea Wolf. Furthermore, the Air-Sea Battle gametypes where planes are dropping bombs on targets echo Meadows Games’ March 1975 game Drop Zone 4, a game where the player drops bombs from a plane onto moving targets on the bottom of the screen. Kaplan did not specify if his gametypes were directly inspired by these arcade games, but it’s certainly possible he was aware of them on some level subconsciously if not.

Near the end of the game’s development, Kaplan said he tried to implement an AI opponent to create a single-player mode, but due to space restrictions in the 2 kilobyte cartridge all he could manage was having one gun fire continuously. Kaplan referred to that single-player mode as “silly and not at all fun,” and while those particular gametypes work in a pinch, they utterly fail to showcase the game’s strengths. At its core, the bulk of Air-Sea Battle is an indirect competition focused on hitting a target before your opponent can, and when your opponent can do little more than mindlessly fire into the sky, there’s no element of stealing a point or bragging about narrowly hitting a plane or ship before another, no-value object gets in the way. It also means the direct-match games where one player tries to hit the other as a plane or submarine are unavailable. It’s a simple game even compared to Combat, but it accomplishes what it sets out to do and remains one of the more interesting and fun VCS releases from 1977. 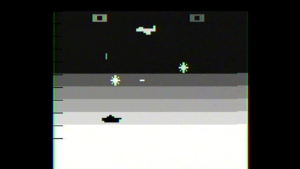 While working on Air-Sea Battle, Kaplan developed a method (known as H-Move) of moving player objects smoothly during a single frame of the picture despite that not being part of the system’s initial design specs, which eventually became a staple piece of coding for the rest of the system’s life. Interestingly, after finishing Air-Sea Battle, Kaplan also helped the busy Larry Wagner finish Combat, replacing a large playfield scoring system with the player score routine used in other games in development and doing some code cleanup.

Air-Sea Battle was advertised as one of the VCS’s launch releases in the early print ads from August 1977, but despite this it appears it, alongside all other VCS 1977 releases, actually started showing up in stores the following month. A number of these early ads suggest that all games other than Combat would be mail-ordered for pickup in the coming weeks, but the most clearcut evidence appears in trade periodical Weekly Television Digest. In the trade’s October 17, 1977 edition, Atari Product Manager Pat Kearney tells the reporters that Atari had started shipping VCS units to retailers in early August, with the first eight game cartridges beyond Combat reaching retailers in late September. Beyond that, Air-Sea Battle did get packaged with the Sears Tele-Games console launch as Target Fun in September, and Video Magazine’s winter buying guide noted it had come out in that fall launch window alongside Combat, Star Ship, Video Olympics and Street Racer. The game was highlighted by name in the first Atari VCS television commercial, which aired near Christmastime in 1977.

The game also received praise from the few game reviewers at the time. The first known written contemporary opinion of the game came in the summer 1979 “Arcade Alley” column in Video, written by Bill Kunkel and Arnie Katz. They praised the game as the ultimate one for “people who enjoy blowing things up,” particularly enjoying the options for guiding projectiles with the joystick after firing. Their only real complaint was the computer’s inability to take advantage of guided projectile game types, since all it does is fire continuously in one direction. This was clearly a minor complaint, as the duo named it “Best Target Game” in the first ever video game awards, dubbed the Arkies, in March 1980.

Air-Sea Battle did end up being a constant on the market. According to an incomplete sales memo glimpsed in the documentary Once Upon Atari, Air-Sea Battle was the 15th best-selling VCS game from 1980 on, with 160,093 copies sold in 1980. Additional internal sales documents indicate Atari sold another 93,182 copies from 1986-1989, alongside newly released technical showcases like Jr. Pac-man and Solaris. 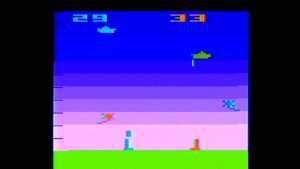 It’s easy to see why this particular cartridge had such a long life despite being one of the earliest titles. Through the VCS’s roughly 14 years on the commercial market – and countless years as a homebrew haven since – there isn’t really anything quite like Air-Sea Battle. Other launch games based around racing, card games, outer space and tank warfare would see variations on their themes over the years, but Air-Sea Battle’s brand of competitive shooting doesn’t really have an heir apparent on the platform. But maybe that’s okay. Kaplan struck gold in 2 kilobytes on his first VCS outing; there isn’t much more to improve or embellish on what Air-Sea Battle does.

All in Color for a Quarter, Keith Smith, 2016 (unpublished manuscript)

Once Upon Atari, Howard Scott Warshaw, 2003