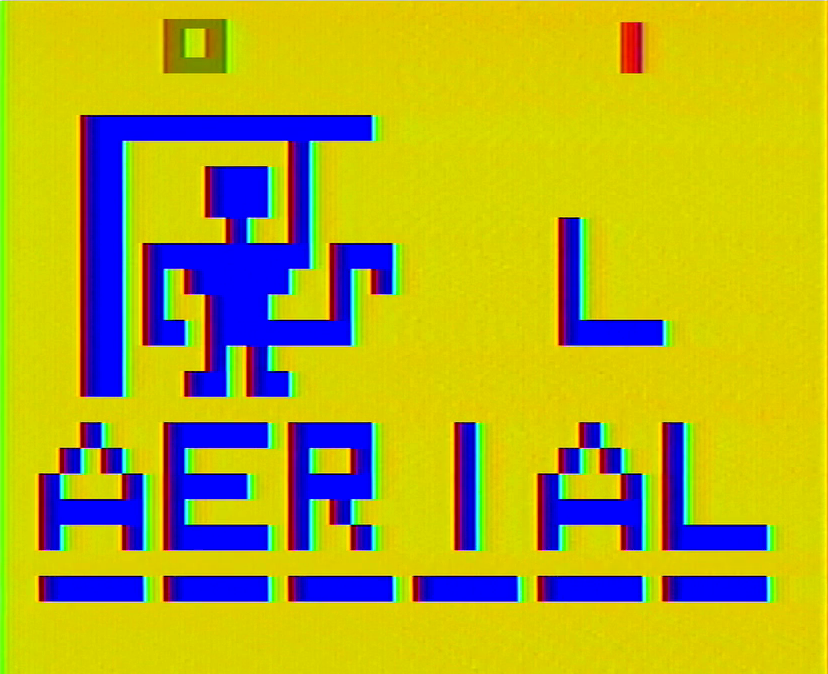 For those unfamiliar, Hangman is a game that dates back to the Victorian era. One person thinks of a word and marks down how many letters it has as blank spaces, and any other players have to guess the letters in the word on the way to figuring out what it is. For each incorrect letter, you draw part of a gallows and a little man with a noose around his neck (or alternatively and less gruesomely, a tree with a monkey hanging from a branch – the image the game manual tries to have you conjure up). Get enough wrong answers, and the drawing is completed – the guessing players have lost, and the word-generating person wins. Guess the word correctly, and that player wins. It’s not a terribly exciting game on its own, but in a pre-video game era, it’s the sort of brain-teasing time-killer that primarily children would entertain themselves with.

Hangman comes to us from Alan Miller, one of three games he wrote that would show up on store shelves this year. It is likely the slightest of them all, though still interesting in its own ways. Miller mentioned in a 1982 interview with Electronic Games that Hangman uses similar graphical routines as his 1977 release Surround, which he described in that same interview as having extremely crude visuals. This is certainly true for Hangman, though once you realize the relationship the similarity is striking. The letters and monkey in Hangman look entirely like something that could be created in Surround’s video art gametype. 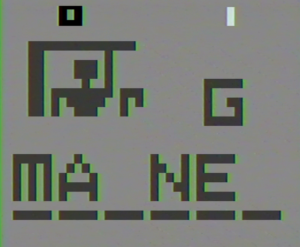 It may be hard to get excited about Hangman today, but the cartridge does have a surprising first on Atari’s platform: it’s the first game program on the VCS that is four kilobytes in size. This is an incredibly tiny amount of space by modern program standards, but every game we’ve seen so far – and will continue to see for some time – fits into two kilobytes of read-only-memory space on the cartridge. According to Miller’s interview with Al Backiel for the Digital Press fanzine, the additional space in Hangman was used to store its library of words – and being the first person to use a 4k cart, he had to clear it with Synertec, the vendor for the ROM chips used in the cartridges, to make sure it could still meet the VCS’s timing and electrical current requirements. 4k games would eventually become the standard for the VCS, as the extra space allows for more features and AI routines, but Hangman predates the general adoption of these larger cartridges by a year – and even then, the next tranche of 4k VCS carts still required special approval to use those cart sizes.

With this vast 4k of space fitting a total of 510 words, Miller programmed in different difficulty levels that would adjust the vocabulary the game would choose from.  The higher the difficulty level, the broader the band of words the game will pull from. In game 1, you’ll get vocabulary from an American first grade level up through third grade; game 2 adds words up to sixth grade, game 3 takes you through ninth grade, and game

4 includes vocabulary from a high school level. If the player guesses the word correctly, they win a point, and if they don’t, the computer gets a point – first to five points wins. Gametypes 5-8 allow for two players to alternate turns guessing the word with the same increasing vocabulary options, with the overall winner being whoever wins five times. Gametype 9 allows one player to create a word for the other player to guess – essentially turning your VCS into an awkward and expensive pad of paper that also requires the guesser to turn away from the television while the word is entered. In all cases, players have 11 tries to guess the letters before the drawing is complete and the game is over. Setting the difficulty switch to A  gives a player 20 seconds to select a letter before the game registers an automatic failure; set to B, the player has unlimited amounts of time to think about their guess.

Hangman was first shown off at both the January and June CES shows that year, and would be shown off at a May press event by the company. It was also presented in the April 1978 product catalog as coming soon, though would not be available at stores until the fall with the rest of Atari’s 1978 catalog. It held on for a surprisingly long time despite being such a simple game: it was advertised as a “brain game” as late as 1982 in one of Atari’s product catalog. After Atari Corporation was formed in 1984 from the ashes of Warner-era Atari’s home division, Hangman disappeared from its sales numbers – save for 1988, when inexplicably the company sold 1,802 copies of the game – these copies likely account for the gray labeled Hangman carts that occasionally pop up with Atari Corp text on them.

In the few product reviews of the VCS at the time, Hangman seemed to be largely overlooked, though in the Electronic Games interview with Miller, it is referred to as “bland.” The game does has a modern reputation of being one of the less popular releases from the early VCS era. This isn’t terribly surprising given that it’s, well, Hangman, but that hasn’t stopped some enterprising fans of developing an editor program to allow people to make their own wordlists and change the graphic. At the least, Atari’s game seems better remembered than the two competing Hangman releases, sold by Fairchild and APF at just about the same time as Atari’s version.

The Channel F Hangman game was first advertised for sale around November 1978, but given Fairchild’s financial straits as the digital watch market imploded, the bulk of the copies likely found their way to shelves in 1979, when Zircon purchased the liquidated Channel F assets from Fairchild and started selling the game itself.   Like the VCS game, it offered a computer generated list of 160 words or the ability to enter your own for two players, and had a series of little twists on the game to keep it interesting. Players can opt to remove all gaps between guessed letters to make it harder to guess the word, hide the number of letters in the word, have the computer provide a free letter, or keep a correctly guessed letter separated from the rest to leave you to guess where it fits in. The game even features a word scramble mode where you have to guess the word based on the series of letters. You also can choose to have a timer like in the VCS version to deal with deep thinkers. Written by Rick Maurer – who would later go on to write the famed Space Invaders conversion for the VCS – Hangman is a relatively impressive attempt at making this game interesting using what the computer brings to the table, rather than just relying on it to come up with a word and leaving it at that.

APF’s version of Hangman was bundled on the same cartridge as Tic-Tac-Toe and Doodle games, and was released on their MP1000 game console. The MP1000 launched around September 1978, and Hangman debuted the same year, likely alongside the console, though there is very little documentation to confirm this. APF’s attempt at this simple game allows you to choose from a range of words based on the letter count, with game 1 covering 3-6 letter words, game 2 featuring words with 7-10 letters, and players dealing with 3-10 letter words on game 3. Players can also choose to enter their own words in. In any case, once the word has been chosen, up to four players select letters by entering in specific numbers on the controller keypads. While it lacks the extra game modes from the Channel F program, it does have some decent visuals and is overall comparable to its brethren. This was written by a developer at APF that MP1000 designer Ed Smith remembered as being named Linda, who he recalls created most of the games on the platform – though no other identifying information is known to say for sure.

I would of  course be remiss if I didn’t also mention the Hangman-esque Buzzword game released on the Magnavox Odyssey2, which reached stores in September 1978 alongside the console itself. Bundled on a cartridge with two other games, Matchmaker and Logix, Buzzword is effectively Hangman without the visual element of the man or monkey. Players have eight guesses to correctly spell out whatever word the program has chosen, with inputs being handled with the system’s built-in keyboard. The game will track the number of misses available, as well as what letters have been tried. While the keyboard input is welcome compared to using a joystick, this version has fewer game options than any of its competitors. While the Odyssey2’s reliance on built-in character sets likely made a Hangman drawing difficult to fit into the cartridge, it is nevertheless disappointing that Magnavox’s rivals all managed to put out more fully featured versions of the game. Unsurprisingly, while Matchmaker and Logix would come out overseas as part of the Philips Videopac library, the English-centric Buzzword would be dropped from the package.

Does Hangman deserve its reputation of being one of the weaker games in the early VCS library? Well, yes, it does. Not because it’s a bad game, but because it’s kind of an unnecessary one if you can find even one more person willing to play Hangman. Other developers would find more interesting and interactive ways to mix language education, mental activities and video games, whereas Hangman and its non-VCS ilk suffer from just being a $20 take on that old standby. While all these platforms were being geared towards children, and something like Hangman may have been an obvious pickup for a parent considering what games to buy, this is certainly not the most exciting thing available even at this point in the VCS’s life.