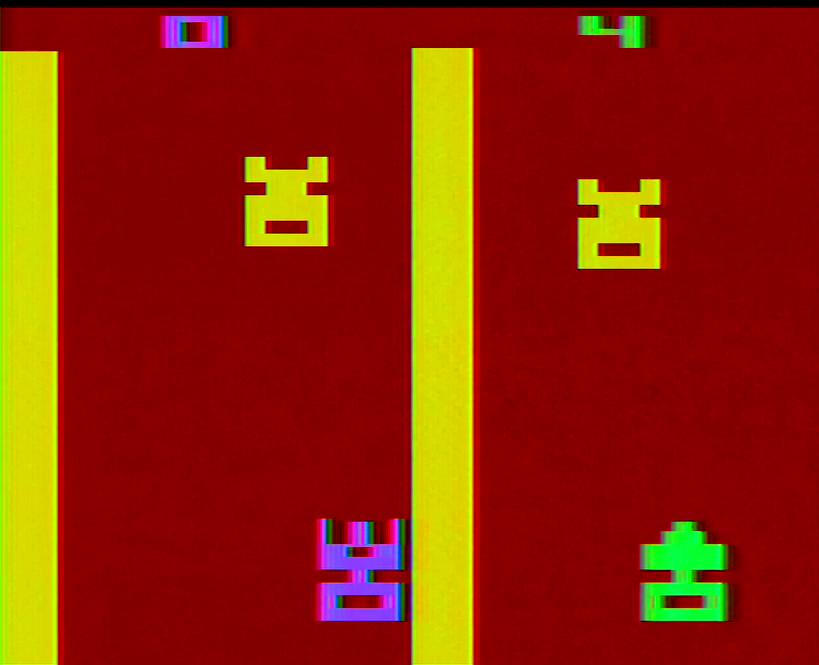 The game’s creator, Larry Kaplan, said that Atari wanted a game that used the paddle controller, so he decided to make a driving game. Initially he planned on doing a home port of the 1976 Atari arcade game Night Driver, but as someone else had already called dibs on that project he had to come up with his own idea. Night Driver would ultimately be done by Rob Fulop and published in 1980, but as he did not work at Atari in 1977, it’s unclear who may have originally intended to work on the game.

In any event, Street Racer does resemble Night Driver in broad strokes if you just move the camera from behind the car to above it. Like Night Driver, you’re limited to only moving forward along the road. You can’t turn around and change directions like in Indy 500, but this also plays to the paddle controller’s relatively limited range of movement. The similarities end there, however. While Night Driver involves moving a car along a winding track, Street Racer has players going down a straightaway. Other vehicles and obstacles serve either as hindrances that slow you down or as bonus points, depending on the gametype.

Street Racer does have the distinction of being an early split-screen game. One player 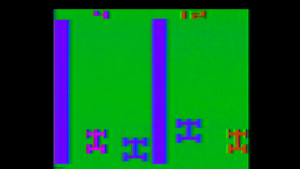 drives along in the left column and the other in the right. As the paddle controllers come in pairs, Street Racer even allows up to four players at a time, with two players sharing a lane as a team. This doesn’t actually work all that well in practice, but it is a neat idea. The game also includes a rudimentary one-player mode, and though this basically consists of the computer-controlled car accelerating constantly without much effort to turn, it kind of works. It’s a far cry from the AI opponent in Video Olympics, though, and Street Racer loses a lot of what fun there is to have when played alone.

Even though it was purely coincidental, Street Racer’s default racing gametype does bear some resemblance to the built-in Speedway game on the RCA Studio II, which came out in February 1977.  Speedway itself is similar to Taito’s 1974 arcade game Speed Race, released in the US the following year by Midway as Wheels (according to Kaplan, the similarities between Wheels and Street Racer were coincidental). For those two games, players are dodging other vehicles to drive as far as they can to rack up points before a timer runs out. For Street Racer, the players get a point for every vehicle passed, either individually or as a team.

Kaplan included several variations on the concept in his VCS game, some of which fundamentally change the game. There are some similarities though: All of them end either after two minutes and 16 seconds have passed or someone gets 99 points, and flipping the difficulty switches to expert means you’ll lose a point for every collision. They also have variations that have players dealing with one or two cars (or some other object) to deal with on screen at a time.

For example, the default street racing game has options allowing for one player to race the computer, two players to go down their separate tracks to pass as many single cars as possible, or have two players deal with two other cars at once. There are also team modes with two cars on each track, or a handicap game of one car against two. 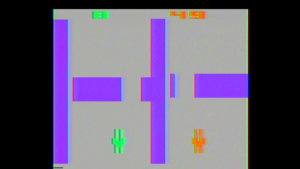 In Slalom, the cars are replaced by skiers that are trying to cross between gates. In this particular game, not only will the difficulty switch cause you to lose points for each collision, the gates are narrowed… and other than that you have the same team modes as Street Racer and the choice of one or two obstacles at once. Slalom is, incidentally, the first attempt at a video skiing game in either the console or arcade markets, after a fashion; while a proper skiing game would have to wait until 1979’s Alpine Skiing for the Odyssey2, Street Racer’s is a good first step – even if you can’t aim your skis in any other directions than forward.

Dodgem is an odd mode for one or two players where your car is driving up the road to the top of the screen before reappearing at the bottom. Meanwhile, “obstacles” that may be rocks or oil slicks or potholes or whatever will come down the road and send you back to the bottom if you collide. This mode has some gameplay resemblance to Atari’s Space Race arcade game, and while the chunky cars make this mode kind of unfair it is pretty different from the other Street Racer games.

The rest of the variations get increasingly strange. Jet Fighter has one or two players firing at enemy planes that come cruising down the lane. Missing a plane will either cause you to lose time or a point, depending on the difficulty switch. It’s a neat idea, but the paddle controller makes it pretty easy to line up a shot once you get the hang of how the enemy planes move.

Number Cruncher might be the best game on the cart. Up to four motorcyclists are trying to pick up random numbers that bounce down the track, with each number providing its point value for your score provided you can hit it cleanly. The game tends to be pretty hectic, and matches end quickly before they can overstay their welcome.

The final gametype, Scoop Ball, is actually an inventive little title. One to four players are trying to pick up balls in their front scoops. This only gives you one point, but you can earn three more by cleanly depositing the ball into goals that also appear on the roadway. Hitting the ball off-center or a deposit without the ball (or also off center) means you don’t get any points.

Atari competitor Magnavox would pack its own take on the Street Racer game with its Odyssey2 platform in 1978. Known as Speedway! it offers a few difficulty level adjustments but is otherwise a pretty straightforward game of dodging other cars on the road. It’s fast, but without the paddle and the additional gametypes (as the rest of the cart is taken up by two unrelated games) it does lose something in comparison to Street Racer. Much the same could be said for the Studio II Speedway game, though it is a significantly slower game than either the VCS or Odyssey2 releases.

Unfortunately, even with all that variety, Street Racer isn’t all that good for the VCS itself. Kaplan himself has said the game didn’t come out very well. Because of its vertical nature, he used low-resolution background graphics for the sprites instead of higher-res player sprites. He also was unable to get any kind of track elements into the game to show speed without it flickering – something he believes would have made the game play better, and that rival games on the Odyssey2 and Studio II featured. Kaplan has since pointed to David Crane’s Grand Prix game that came out years later in 1982 as the realization of what he wanted to do with Street Racer.

Strangely enough, Atari seemingly took Street Racer as it was in development and had

it turned into a dedicated, first-generation console. Alongside the VCS in August and September 1977, Sears published a console called Speedway IV, which included a four player driving game similar to Kaplan’s VCS title. They also sold Kaplan’s game as Speedway II. Kaplan said he has vague memories of the Sears-published Speedway game being done by someone outside Atari’s development teams, though as of this writing it’s unclear who developed it. Sears also seems to have sold a two player dedicated console simply called Speedway in Canada that eliminated the two extra players. Unlike the VCS version, these dedicated consoles have scores popping up in the playfield, reportedly get faster paced, and include a Pong game. The VCS game did have a much longer shelf life, however- according to internal sales data rescued from a hard drive by Curt Vendel, Atari continued selling copies of Street Racer into 1988 (albeit only a small number; only 2,131 between 1986 and 1988). An incomplete internal sales document seen in the Once Upon Atari documentary indicates Street Racer was Atari’s 20th best-selling game at the time that the unfortunately undated document was created, moving 89,260 units in 1980. Sales for successive years are cut off in the image we have, but for 1980 those are pretty decent sales numbers – well below the 160k Air-Sea Battle units that sold, but more than Video Olympics (and seemingly all the other 1977 titles).

The idea behind Street Racer is a good one, but it would be a few years before developers truly got a handle on the VCS hardware and could do it justice.

Larry Kaplan, interview with the author, 2017