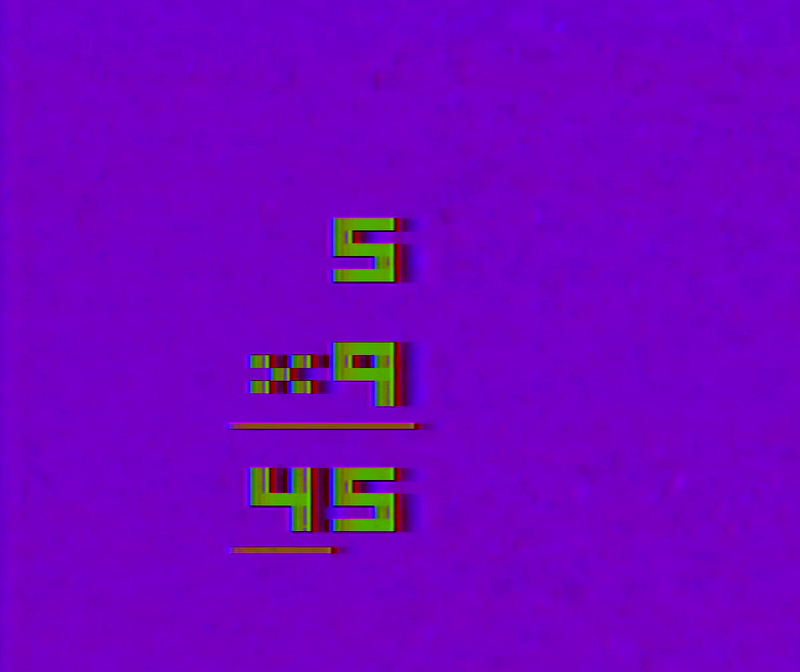 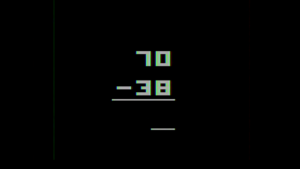 In practice, this was more advertising bluster than anything. These games were on the market, and they are ostensibly educational, but they aren’t all that fun. Atari’s first offering in this educational lineup was Basic Math, or simply Math under the Sears line. Basic Math is seemingly the sole VCS release developed by Gary Palmer. Prior to making the game, Palmer created new debugger stations for the game developers; at first the development environment was little more than a timeshare computer terminal only capable of showing one line of code at a time, along with a modified-but-simple KIM-1 board provided by Ed Riddle. While fellow developer Alan Miller went to work convincing Atari to get a PDP-11 to help develop games, Palmer spent much of his time after coming on board in February 1977 building more robust debugging equipment.

Basic Math is exactly what it says on the label. The cart has a few different game modes, built around addition, subtraction, multiplication, and division. The game will present the player with a series of math problems, and they must enter the correct answer.  The game will keep track of how many correct and incorrect responses the player puts down and will tally it up after 10 problems. Get it right, and you have a triumphant little rendition of “Charge!” Get it wrong, and you get a sad little series of tones along with the correct answer. 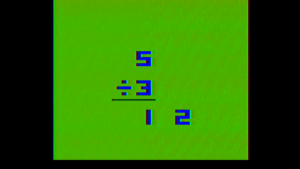 The select switch allows you to switch between what types of problems will be presented between the four major types of math. The first four game types allow you to choose what your top number will be, and will then randomly fill in the second number as a variable for you to solve. The latter four game types are “random problems” that will choose both numbers for you. The right difficulty switch adjusts whether or not you have a timer for each problem; the left switch will indicate how long it’ll be in the first four gametypes: you get 12 seconds or 24 seconds to answer a problem. In the last four gametypes, the left switch will allow you to choose between two digit problems at a 24 second timer or single digit problems with a 12 second timer. The game will never really tell you how to reach the right answer, but it’ll let you know if you do.

As noted, practically every early game console was shoveling out these educational games as a selling point to dubious parents, and Atari’s 1977 competitors were no exception. The Channel F had a pair of Math Quiz games written by developer Vilas Munshi, which combined are functionally very similar to Atari’s game. According to internal Fairchild documents saved by Jerry Lawson and donated to the Strong Museum of Play after his death, these two videocarts were pitched by Fairchild employee Mike Hatcher (possibly a manager for software projects, as Munshi remembered someone with a name along the lines of “Holland” or Harlan) as a single game. Lawson noted on the pitch document that these weren’t really any fun or all that educational, but nevertheless Munshi was tasked with making it into an actual product. The first, released in April 1977, covers addition and subtraction, while the second came along in August with multiplication and division problems. Rather than just using the controller to move from digit to digit, however, the Channel F games use the controller’s different types of functionality. Twisting the stick will change either the ones or tens digit, or pushing it left will allow you to do the same for the hundreds or thousands digit. Pushing it right again will send you back to the ones and tens. It’s actually kind of confusing in practice even if you’ve got a manual to explain to you what to do. The game will at least give you a second chance if you answer wrong, and amusingly the instruction manuals include a whole list of “games” players can play amongst themselves using the videocarts.

For the Studio II, there was Math Fun, which was not only the second game in its TV School House series, but was also the first of two Studio III games to make it to North American markets, even though the Studio III itself never did. The game awards points depending on how quickly players answer the question within either a slow or fast count. The game does have a mode that mixes up what kind of math problems you’ll get, so it can end up being more challenging than its competitors in that regard; and perhaps unsurprisingly the Studio II’s funky keypad controls work incredibly well for entering in numbers. This game was written by Andy Modla, and he considered it forgettable enough that he himself forgot he was the author until he revisited his resume.  Math Fun may see its roots in early Math Drill software created for the FRED prototype computer that would ultimately be the basis for the 1802 microprocessor and the Studio II itself, but there’s no indication Modla was aware of these early attempts when he wrote his cart, or that anyone had informed him of their existence.

Despite the lukewarm reception to these early math games, in the years following the VCS’s release other consoles would get their own attempts at the exact same premise – from the Odyssey2’s Math-A-Magic and the Bally Arcade’s Elementary Math, to the Intellivision’s Electric Company Math Fun cartridge. While these all have their own unique input methods and visuals, they are all essentially doing the same sort of math drill action.

Basic Math reviewed somewhat poorly at the time; a 1979 review of the VCS in Video magazine gave it a 5 out of 10, while David Ahl deplored its input methods and wished it used keypad controllers in the pages of Creative Computing’s July 1978 roundup of VCS software. It isn’t all that surprising, since this isn’t really a game for adults, and it’s not all that fun for kids, either. Atari did keep it in circulation for a while though; the game was renamed Fun With Numbers in January 1980, and would be discontinued by Warner-era Atari by January 1982. But after Warner sold off Atari’s home division to Jack Tramiel, Atari Corporation kept the game in circulation through 1988, when it sold about 6,246 copies. While these aren’t great numbers by any stretch, it seems as though having an educational selling point stuck with Atari well into the VCS’s later years.

As for Palmer? He moved on from Atari after finishing this game, but would come back to help assist Larry Kaplan, David Crane and Alan Miller as they developed an operating system for the Atari 400 and 800 computers, working on the I/O portion. Unfortunately what he did in the interim and after helping with the OS are unknown as of this writing.