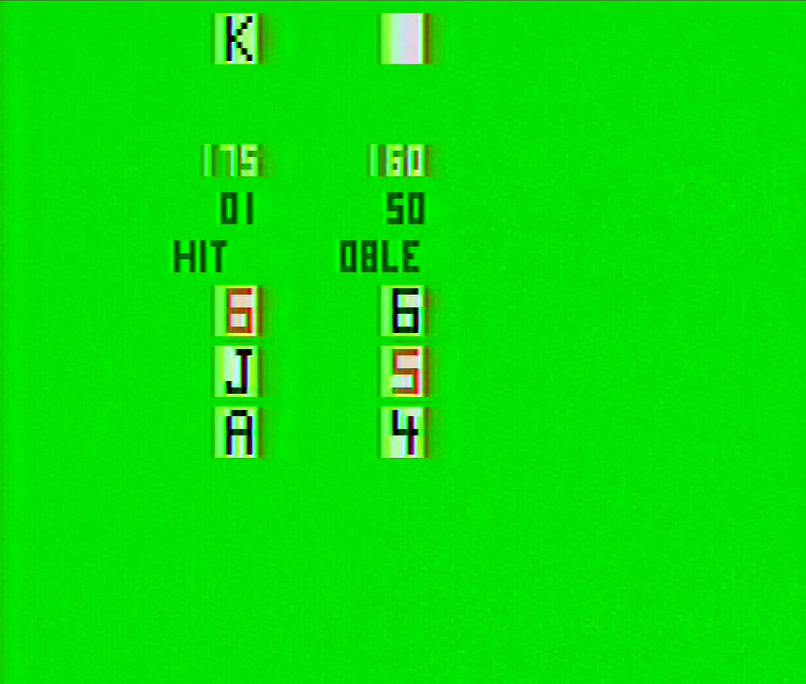 Fairchild released a version of the game for its Channel F console close to the console’s launch in 1976, and RCA’s own conversion came out around September of 1977, around the same time as Atari’s cartridge. Both of these games have their roots in much earlier programs – Fairchild’s game was originally created by engineer Suresh Vasa for the F8M, a development board for the F8 microprocessor that would go on to be used in the Channel F. According to former Fairchild engineer Rich Olney, the F8M was designed to help support software creation for their newly created MPU – it featured the capability to halt the computer clock by single steps, in turn allowing for memory to be examined and altered as needed. Vasa wrote a Blackjack program around 1975 for this development system as a test program, and when the Channel F entered development, he provided his code as a base for the console’s own version of the card game. The conversion was largely done by a contractor named Jerry Thacker, with Olney providing some bells and whistles towards the end.

At RCA, two Blackjack programs versions – known as 21 and 21-II (the latter dated April 23 1973) – were written for the FRED microcomputer prototype system designed initially by Joe Weisbecker. These two programs would ultimately not be connected to the Blackjack cartridge RCA published for the Studio II, however – that game, written by Andy Modla, stemmed from casino gambling coming to nearby Atlantic City and the marketing staff for the console becoming interested in putting it on the platform. Modla himself was interested in card counting and blackjack in general as well, and so felt that it was a natural fit for the Studio II. While card counting did end up being stripped out of the game to fit within the space limitations Modla had to work with, the game indeed worked well with the Studio II’s keypad controls and ended up a relatively popular seller, accounting for 18% of all reported cartridge sales on the platform. He would end up reworking the game code further to include in the color Studio III platform that ultimately would only appear overseas as licensed clones by the Hong Kong-based Conic. A standalone blackjack cartridge would also show up for the Magnavox Odyssey2 at its 1978 launch, though unfortunately I have not turned up much insight into its development. Beyond those platforms, blackjack would appear on casino carts for the APF MP1000, Bally Professional Arcade and Mattel Intellivision, meaning that if you had basically any video game console in the late 70s or early 80s, you could play blackjack on it.

The ubiquity of blackjack on computerized platforms isn’t too surprising. It’s a popular card game that’s also simple enough that it could be coded within the space confines of early cartridges. And since blackjack is ultimately a contest between a dealer and the individual player, it avoids the complexity of poker, bridge, or a myriad of other card games that would see VCS conversions in the coming years. 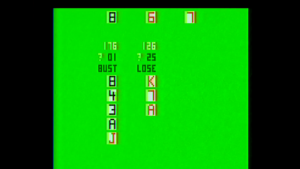 Bob Whitehead wrote Blackjack on the heels of his Star Ship 1 conversion, jumping from outer space action to a slower paced gambling game. Whitehead explained that the developers knew early on that a gambling game would be appealing, given that they were all in the target audience for the VCS (described jokingly as a teenager between the ages of 18-35). So they’d write games they thought would be interesting to themselves, and he was interested in blackjack. The cartridge ended up using the VCS paddle controllers simply because Whitehead recognized that there weren’t many types of games that the paddles were really suited for, and the company wanted to ensure that paddle controller owners felt like there were games that used them. As a bonus, this allowed for three players at once in this VCS rendition of Blackjack since the paddle controllers came in pairs that plugged into a single controller port.

Blackjack was the first VCS game to rewrite copied player graphics on the fly – essentially using the stripped-down nature of the machine, which required developers to be in constant control of the image, to push it beyond what it was designed to produce. This technique would get used in later games to generate six-character score ranges.

Halfway through Blackjack’s development, Whitehead said he really wanted to expand it to include other card games, but since it was important to “pump out product,” he ended up shelving his expansive design goals. He would end up revisiting the concept with March 1979’s Casino, which was a larger cart that included stud poker and solitaire poker alongside blackjack. 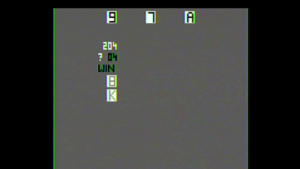 Even though its sequel renders the original Blackjack a largely superfluous part of the VCS library, it’s not a bad rendition of blackjack. The player bets up to 25 chips and is dealt a pair of cards, and is given the option to try and double their bet for an additional card, hit for as many cards as they want, or stand and see if their hand beats the dealer’s. Whoever comes closest to 21 without going over wins; if there’s a tie, the computer wins. The player can win the game overall by taking in 1000 chips, or lose by going completely broke. The game uses paddle controllers, and they work pretty well, providing a pretty smooth cycle through the game’s menus, and allowing for up to three players at once. The game even includes a little sound effect for the dealer cutting the cards whenever you end up getting through the bulk of the deck.

The difficulty switches adjust the rules of the game. The left switch will determine if the dealer shuffles the cards after every hand or after two thirds of the deck has been cleared. The right difficulty switch sets the game to casino rules: ties don’t impact your score, the dealer must hit a soft 17 or less, the dealer stays on hard 17s, and the player is allowed to double their bet on the first hit if they have a 10 or 11. The player is also allowed only four hits. The game select switch allows a player to “leave or join” the table.

It’s worth also mentioning a little bit about Casino’s revised take on Blackjack, since it is something of an expansion of the ideas here. While Casino changes the ruleset options – no longer letting players decide whether or not they want the option of doubling bets and who wins on ties – it does add in insurance rules and allows for up to four players. These differences do mean that if you like the specific options in Blackjack that it’s still worthwhile in relation to its successor, but these changes are ultimately relatively minor for most people who’d be playing Atari versions of card games.

Blackjack reviewed well in the winter 1979 issue of Video magazine, where it was called a “good game for adults,” but other publications (such as Creative Computing’s July 1978 VCS roundup) and columns seem to largely just note that it is simply blackjack. With Casino on the market, Blackjack was relegated to being cleared out in consumer promotions by fall 1979, and would go on to be discontinued by the January 1982 CES show; it doesn’t appear to have returned to marketplaces afterwards beyond clearing out old stock. Nevertheless, Casino ensured that the card game remained on the market well into the VCS’s twilight years, with small sales numbers recorded as late as 1989.

The Sarnoff Collection, The College of New Jersey